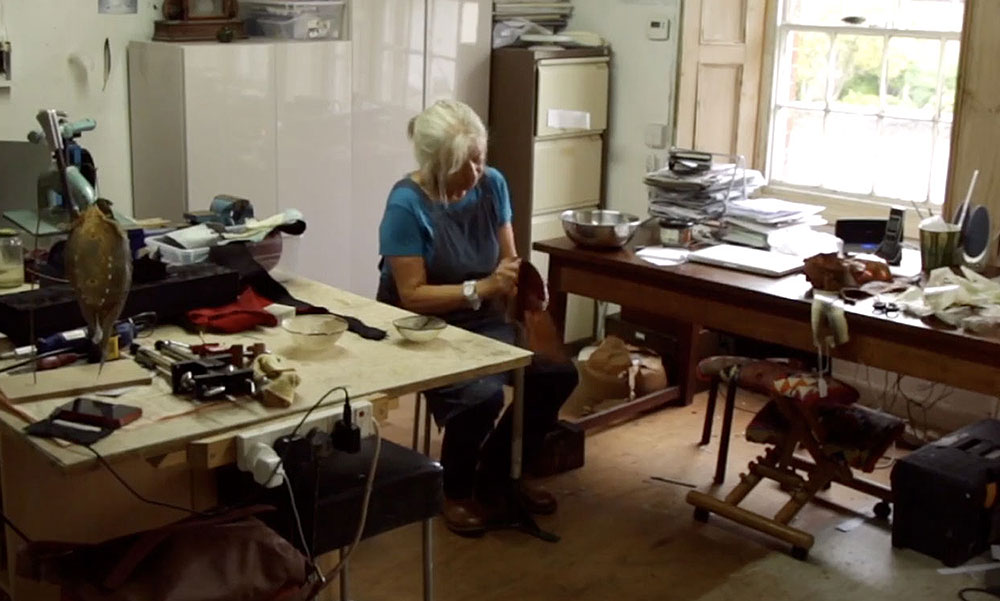 Kari Furre is a sculptor and swimmer: She works with metal and fishskin.

She tans fish skin using sustainable methods used by Nordic people, with oil or willow bark. Experimenting with different species of fish, bringing attention to the spirit of the animals by showing the amazing beauty of their skin, a material that is usually destined to be discarded. She is interested in process and technique, whether it be metal work, tanning process, or swimming. All the processes involve tacit experiential learning.

Kari worked for many years making objects for museum and heritage exhibitions, and has a sense of history from making diverse objects for displays. Her objects come from the sea and are about the sea, celebrating ancientness, preciousness, fragility and translucency.

Kari studied physics, chemistry and biology at school, this choice of subjects has meant she has an understanding of materials and anatomy, a wonderful foundation for a career in the Arts.
She then went to Drama school: The Rose Bruford College of Speech and Drama 1968-71, where she was introduced to dance, Alexander Technique, voice work, yoga and scenic making, all of which has formed the basis of her work, the acting she originally thought was the way forward fell by the wayside.

Kari worked as a Theatre Designer 1971-1985, all aspects of design, prop making, costume making etc – Always interested in physical theatre, as opposed to script based work. She worked with the Magdalena Group of International Theatre Practitioners 1985-1987 making improvised work.

From 1987-1999 The Heritage industry was at its height and Kari first worked for Heritage Projects and then ran her own company making figures and props for museum and heritage centres. Working with clay and original materials, she realised you could find authenticity by using authentic materials.

From 1999-2007 she worked as one of a team of fabricators, making work for Yink Shonibare for museums all around the world. Followed by a first class honours degree in Contemporary Craft at Plymouth college of Art 2010 -2013

She has concentrated on Fish Skin tanning, and Swimming since that time, travelling to Iceland and Sweden to research techniques. She has been featured in Hole and Corner  a Contemporary Craft Magazine, and the German ecology and craft magazine Werde

Always swimming for fitness, Kari Trained with Steven Shaw to teach swimming based on the principles of the Alexander Technique. The training opened her eyes to the possibilities of swimming beyond the pool. In 2005 she helped to research Kate Rew’s book Wild Swim, and started to swim longer distances out of doors. The Outdoor Swimming Society was born in 2006

Kari has been a director of the Society since then and watched with amazement the exponential growth in popularity in outdoor swimming. She ran a very successful course at Dartington for Artists with a swimming Practice, Swimming, Labour of Imagination. She teaches adults to swim.